(P15-167-20) Breastfeeding in Infants from 0 to 3 Years of Age Who Attend Nurseries in Alt Urgell Region, Catalonia (Spain): An Observational Study 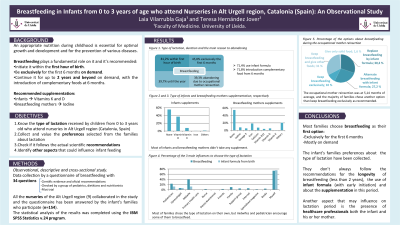 Objectives: The aim of this study was to know the type of lactation received by children from 0 to 3 years old who attend nurseries in Alt Urgell region (Catalonia, Spain), and furthermore, check if it follows the actual scientific recommendations.

Methods: This observational, descriptive and cross-sectional study involves all the current nurseries of the Alt Urgell region. A questionnaire of breastfeeding has been used with 34 questions to collect breastfeeding period data, and it has been answered by the infants’ families. The statistical analysis of the results was completed using the IBM SPSS Statistics v.24 program.

Results: A total of 154 infants (85 boys and 69 girls) participated in the study and the average age was 1 year old. About 90% of newborns received breastfeeding at birth and just 46% were exclusively breastfed until six months of age with 40% continuing until the first year of age. The main reasons for abandoning breastfeeding were the occupational reinsertion of the mother (39%), low breast milk production (28%) and the starting of complementary feeding (25%). At an average of four months of age, 71% of children were fed with infant formula. Following the institutional recommendations, 72% of the infants started complementary feeding at six months of age. In terms of infant dietary supplementation, 37% received vitamin D supplement and 8% vitamin K, while 55% didn’t receive any supplement. Less than half of the mothers (45%) received dietary supplementation within the breastfeeding period and only 22% included an iodine supplement.

Conclusions: Most families choose breastfeeding as their first option; however, they don’t always follow the recommendations for the longevity of feeding, similarly, with the feeding of infant formula and dietary supplementation.