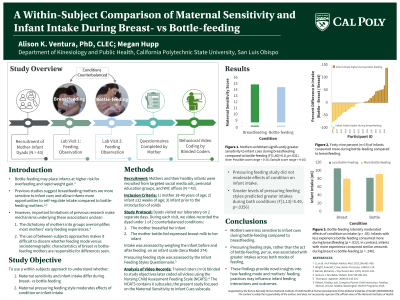 Objectives: Bottle-fed infants are at higher risk for overfeeding and rapid weight gain compared to breastfed infants. However, given evidence illustrating sociodemographic and psychosocial differences between breastfeeding and bottle-feeding mothers, it is unclear whether feeding mode versus unmeasured covariates are the primary driver of differences between breast- and bottle-feeding. The objective of the present study was to use a within-subject experimental approach to describe whether and how breastfeeding versus bottle-feeding impacts early feeding interactions.

Methods: Mothers and their young infants (n=46) visited our laboratory two times for counterbalanced, video-recorded feeding observations. Mothers breastfed their infants during one visit and bottle-fed their infants expressed breast milk during the other visit. Trained raters blinded to study aims later coded videos to assess maternal sensitivity to infant cues using the Nursing Child Assessment Parent-Child Interaction Feeding Scale. Infant intake was assessed by weighing the baby before and after the feeding. Maternal reported level of pressuring feeding style was assessed via the Infant Feeding Styles Questionnaire and tested as a possible moderator of effects of feeding mode on maternal sensitivity to infant cues and infant intake.

Conclusions: Mothers were less sensitive to infant cues during bottle- compared to breastfeeding, but pressuring feeding style, rather than the act of bottle-feeding, per se, was associated with greater intakes across both modes of feeding.