(P15-086-20) Growth Through 24 Months of Age in Infants Receiving Formulas with or Without Added Bovine Milk Fat Globule Membrane (MFGM) or Human Milk Through the First Year of Life: An RCT 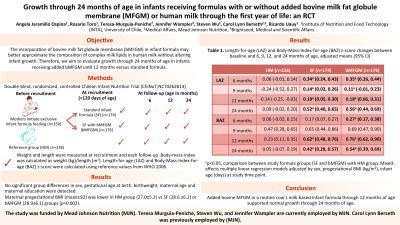 Results: No significant group differences in sex, gestational age at birth, birthweight, maternal age and maternal education were detected, with the exception of maternal pregestational BMI (mean(SD)) (HM: 27.0(5.2) lower vs SF: 28.6(6.2) or bMFGM: 28.9(6.1); P=0.002). Groups were similar at baseline (weight, length, WAZ, BAZ) with the exception of LAZ (lower in the bMFGM compared to HM group; P< 0.05). No significant differences in growth z-scores (absolute at 6, 9, 12, and 24 months of age or change between baseline and each study time point) were detected between SF and MFGM groups. Both randomized study formula groups were associated with higher growth z-score increases from baseline compared to the HM reference group between 6 and 24 months (P less than 0.05). Mean growth z-scores fell within the range of -1 to 1 (16th to 84th percentile) for SF, bMFGM, and HM groups at all study time points.