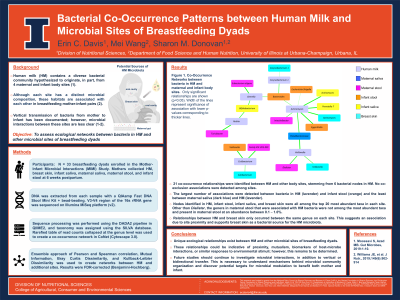 Objectives: The human milk (HM) microbiota is predicted to originate from the maternal gastrointestinal tract, saliva and breast skin, and infant saliva. Though compositionally distinct, these habitats are strongly associated during breastfeeding. Vertical microbial transmission from mother to infant has been documented, but complex microbial interactions between sites are less clear. Herein, ecological networks between HM bacteria and other microbial sites of breastfeeding dyads were assessed to investigate the origin of the HM microbiota and how it may shape the infant gut microbiota.

Methods: DNA was extracted from maternal and infant saliva, HM, breast skin, and maternal and infant stool samples collected at 6 weeks postpartum from 33 mother-infant pairs. The V3-V4 region of the 16S rRNA gene was sequenced and taxonomy was assigned using QIIME 2. Co-occurrence patterns among genus-level abundance data were analyzed in CoNet (Cytoscape 3.0).

Results: Twenty-one significant co-presence relationships were identified between HM and other microbial communities. Associations spanned from six nodes in HM including Corynebacterium, Cutibacterium, Gemella, Rothia, Veillonella, and Actinomyces. Co-presence between Cutibacterium, Veillonella, Actinomyces, and Corynebacterium on skin and HM were identified, supporting breast skin as a principal contributor to the HM microbiota. Interestingly, Bifidobacterium in infant saliva was associated with Gemella and Rothia in HM. The greatest number of relationships existed between HM and infant stool. HM Gemella, Actinomyces, and Corynebacterium were associated with Bacteroides in infant stool; HM Actinomyces was also associated with infant fecal Escherichia-Shigella and Eggerthella. Additional relationships were identified between HM and maternal saliva and fecal microbiota.

Conclusions: Several unique ecological relationships exist between HM and microbial sites of breastfeeding dyads. Whether these relationships are indicative of proximity, mutualism, or are biomarkers of other host-microbe interactions remains to be determined. These data will be useful to uncover mechanisms driving microbial community organization and potential targets for microbial modulation in this population.