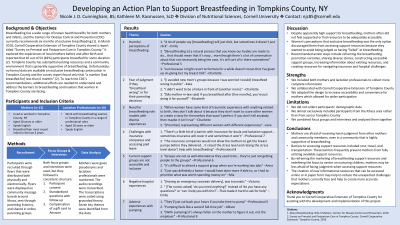 Methods: Focus groups and interviews were conducted with mothers (n=15) who had breastfed within the last 3 y and professionals (n=10) who work with lactating women. Participants were recruited through flyers sent in local mailing lists and placed in community spaces around the Ithaca area. All participants lived or worked in Tompkins County.

Results: Mothers reported early cessation of breastfeeding for a number of reasons including perceived insufficient milk production and a need to return to unsupportive workplaces. Despite a wide availability of breastfeeding support resources in the Ithaca area of Tompkins County, resources were uncoordinated and underutilized. Mothers were aware of some of the available resources, but had difficulties sorting through varied information sources and identifying programs that were a good fit for their individual needs. Furthermore, many mothers, such as those who complemented breastfeeding with formula, reported worrying that local mothers’ groups or lactation support groups would be judgmental. This fear of judgment or embarrassment led many women to avoid seeking support at these venues that may have been useful to them.

Conclusions: Improved coordination of messaging and centralization of resource information is essential to increasing breastfeeding success across Tompkins County. An overall shift in messaging to reframe breastfeeding as one of many forms of nurturing, rather than just a food source, may be effective at reducing shame and judgment while encouraging mothers to overcome their challenges.