(P15-026-20) Awareness and Perception of Carbohydrate-Controlled Diets for Management of PCOS: A Benchmark Study 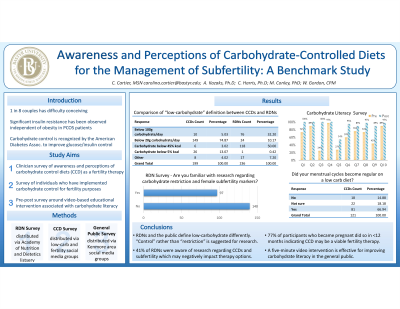 Has Audio
Objectives: Infertility affects 6.1 million women in the United States. There is currently no recognized Medical Nutrition Therapy to optimize fertility. Despite a lack of research evidence of safety and efficacy, carbohydrate restriction (CR) and carbohydrate-controlled diets (CCD) are utilized by individuals and practitioners as a treatment for subfertility. An aim of this study was to assess awareness and perception of CR as a treatment for subfertility by Registered Dietitian Nutritionists (RDN). In addition, a secondary aim was to compare similar questions gathered from individuals who followed a CCD for fertility enhancement.

Methods: This study was a combination of two surveys open for respondents July 2019 to January 2020 via REDCap. The survey for the first aim had a restricted population of RDNs consisting of 20 questions investigating perception of CR therapy and experience with patients with subfertility. The survey was emailed via listserv through the Academy of Nutrition and Dietetics. The second survey targeted individuals who implemented CR as a fertility therapy. It consisted of 45 questions and was distributed to CCD related social media groups.

Results: The first survey had 240 RDN respondents with an average of 12 years of experience. The second survey had 203 CCD respondents of which 49% had followed a CCD for less than one year. While the remaining 51% followed a CCD for an average of 3.6 years. There was a statistically significant difference between how the two groups defined carbohydrate restriction χ2 (3, 410) = 265.4, p < 0.01. Among RDNs, 49.8% selected “Below 45% kcal from carbohydrate / day” and 32.2% selected “Below 100g carbohydrate / day”. In contrast, 75.4% of followers of a CCD selected “Below 20g carbohydrate / day”. A total of 41% of RDNs were familiar with research regarding the effect of carbohydrate reduction on female subfertility markers, such as PCOS and anovulation, of which 67% believe the body of evidence demonstrates “generally positive outcomes” on markers of fertility.

Conclusions: The results of this study highlight the lack of a consistent definition of CCD between providers and the public. There may be a need for educating providers that research regarding CCD and fertility exists, but effectiveness of CR as a treatment cannot be properly assessed without an agreed upon definition.