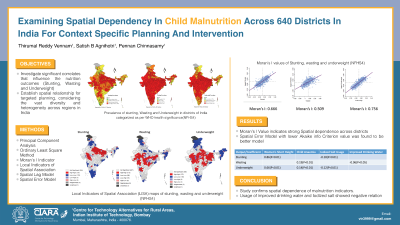 Objectives: India, in accordance with United Nation’s Sustainable Development Goals, is committed to reduce malnutrition, which accounts to 68.2% of deaths in children below 5 years in the country. The fourth round of National Family Health Survey (NFHS4) provided information on nutrition and health at district level, for the first time. The objective of this study was to investigate significant correlates that influence the nutrition outcomes, and establish a spatial relationship, if any, which would help in informing policy decisions and targeted planning, considering the vast diversity and heterogeneity across regions in India.

Conclusions: This study confirms spatial dependency in malnutrition in India and urges the need for focused interventions to tackle malnutrition.