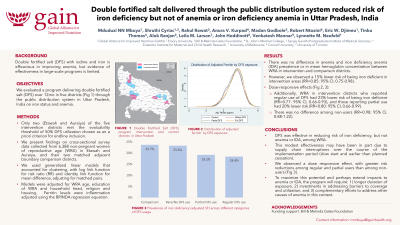 Methods: Only two (Etawah and Auraiya) of the five intervention districts met the evaluability threshold of 50% DFS utilization chosen as an a priori criterion for endline inclusion.  We present findings on cross-sectional survey data collected from 6,388 non-pregnant women of reproductive age (WRA) in Etawah and Auraiya, and their two matched adjacent boundary comparison districts.   We used generalized linear models that accounted for clustering, with log link function for risk ratio (RR) and identity link function for mean difference, adjusting for matched pairs.  Models were adjusted for WRA age, education of WRA and household head, religion and housing.  Ferritin levels were inflammation adjusted using the BRINDA regression equation.

Conclusions: DFS was effective in reducing risk of iron deficiency, but not anemia or IDA, among WRA.  This modest effectiveness may have been in part due to supply chain interruptions over the course of the implementation period (slow start and earlier than planned cessation).  We observed a dose responsive effect, with greater risk reductions among regular and partial users than among non-users.  To maximize this potential and perhaps extend impacts to anemia or IDA, the program will require: 1) longer duration of exposure, 2) investments in addressing barriers to coverage and utilization, and 3) complementary efforts to address other causes of anemia in this context.