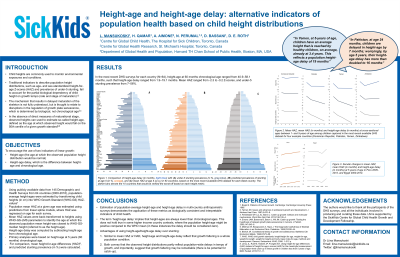 Objectives: Alternative indicators may enrich the description of population height distributions alongside age- and sex-standardised height-for-age Z-scores (HAZ) and prevalence of under-5 stunting. We propose two indicators of linear growth that account for the partial biological dependency of child height on growth tempo: height-age, which is the age at which the observed height distribution would be normal; and, population ‘growth delay’, which is the difference between height-age and chronological age.

Methods: Using data from 145 Demographic and Health Surveys from 64 countries (2000-2018), population-average height ages were estimated by transforming child heights (in cm) into WHO Growth Standard (WHO-GS) HAZ-values. Population mean HAZ at a given age was estimated using predictions from linear spline models, where HAZ was regressed on age for each survey. Mean HAZ values were back-transformed to heights using WHO-GS-LMS parameters to identify the age at which the observed population mean height was closest to WHO-GS-median height (referred to as the height-age). Growth delay was computed by subtracting height-age from chronological age. Primary analyses were based on height-age at 5 years (60 months) chronological age. For comparison, mean height-for-age differences (HAD) and under 5-stunting prevalence (in %) were calculated.

Results: In the most recent surveys for each country (N=64), height-age at 60 months chronological age ranged from 40.9–58.1 months, such that growth delay ranged from 1.9–19.1 months. Mean HAZ ranged from -2.32 to -0.22 Z-scores, and under-5 stunting prevalence from 7.1–56.0%. A comparison of growth delay at 5-years, under-5 stunting prevalence and mean HAZ at 5-years showed that countries were similarly ranked by all indicators. Country case studies showed some differences in the trajectories of growth delay by age, versus mean HAZ or HAD by age.

Conclusions: Population-average height-age and growth delay, derived from anthropometric surveys, are biologically consistent and interpretable indicators of child health and nutritional status. These indicators may be preferred over mean HAZ or stunting prevalence for conveying the critical role of growth tempo and later catch-up potential in height.