(P14-052-20) Are Data Available to Measure Progress in the Coverage of Essential Nutrition Actions in South Asia? A Review of Demographic and Health Surveys in Seven Countries, 2005-2018 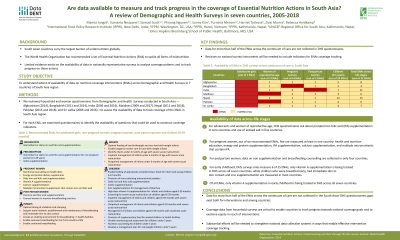 Objectives: South Asian countries carry the largest burden of undernutrition globally. The World Health Organization has recommended a set of Essential Nutrition Actions (ENA) to tackle all forms of malnutrition. Limited evidence exists on the availability of data in nationally representative surveys to analyse coverage patterns and to track progress on these actions.

Conclusions: Data for more than half of the ENAs across the continuum of care are not collected in the South Asian DHS questionnaires; gaps exist both for interventions and among countries. Coverage data from household surveys are critical to enable countries to track progress towards national coverage goals and to examine equity in the reach of interventions. To support national efforts to scale-up the coverage of ENAs, national survey instruments should be reviewed to include indicators on the coverage of a broader set of ENA indicators.