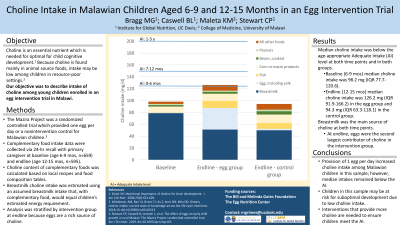 Has Audio
Objectives: Choline is an essential nutrient which may be important for child growth and development; however, data on intake among children in low and middle income countries are scarce. We aimed to describe choline intake among Malawian children age 6-9 and 12-15 months enrolled in an egg intervention trial.

Methods: The Mazira Project was a randomized controlled trial of the effect of daily egg consumption on growth and development in Malawian children. Children 6-9 months old were randomized to the intervention group, which received one egg/day for 6 months, or to the control group, which did not receive eggs. Data on children’s complementary food intake were collected by 24-hour recall interview with the primary caregiver at baseline (6-9 months of age; n=659) and at endline (12-15 months of age; n=595). Choline from complementary foods was calculated based on local recipe and food composition tables. Breastmilk intake was approximated as the child’s estimated energy requirement minus energy from complementary foods, and then multiplied by an assumed choline concentration.  Total choline intake was compared to the Adequate Intake (AI) level. Contribution to choline intake by food source was calculated at each time point. Since eggs are high in choline, analysis was stratified by group at endline.

Conclusions: Choline intake is low among the Malawian children in this sample, potentially putting them at risk for poor development. The egg intervention increased choline intake, specifically from eggs, but the median intake in this group was still below the AI.