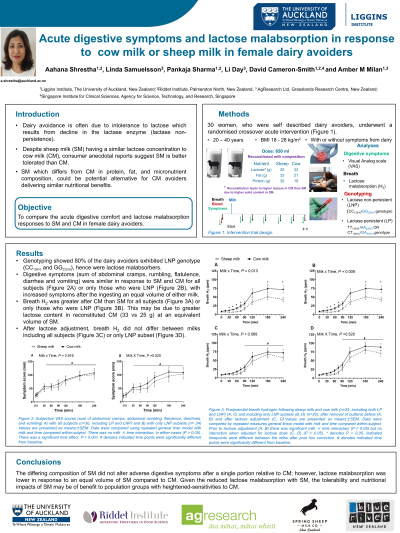 Objectives: Sheep milk (SM) is compositionally different from cow milk (CM), but maintains the nutritional benefits of CM, making it a potential alternative for CM avoiders. While dairy avoidance is often due to intolerance to lactose, which is also found in SM, there are consumer anecdotal reports that SM is better tolerated than CM. Thus, this clinical trial was undertaken to assess acute digestive comfort and lactose malabsorption comparing SM and CM in female dairy avoiders

Conclusions: The differing composition of SM did not alter adverse digestive symptoms after a single portion relative to CM, although the lower lactose content reduced breath H2 response in SM. However, tolerance to SM should be further investigated with lactose matched milk (as occurs naturally) and in non-lactose related dairy intolerance to elucidate if these individuals could benefit from SM.