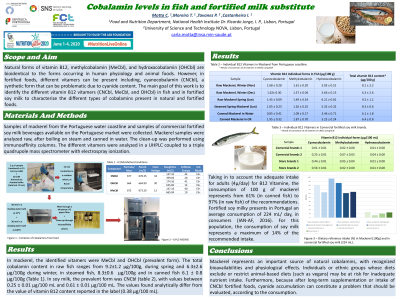 Objectives: Natural forms of vitamin B12, methylcobalamin (MeCbl), and hydroxocobalamin (OHCbl) are bioidentical to the forms occurring in human physiology and animal foods. However, in fortified foods, different vitamers can be present including cyanocobalamin (CNCbl), a synthetic form that can be problematic due to cyanide content. The main goal of this work is to identify the different vitamin B12 vitamers (CNCbl, MeCbl, and OHCbl) in fish and in fortified soy milk to characterize the different types of cobalamins present in natural and fortified foods.

Methods: Samples of a fish from the Portuguese water coastline (mackerel) and samples of commercial fortified soy milk beverages available on the Portuguese market were collected. Mackerel samples were analyzed raw, after boiling on steam and canned in water. The clean-up was performed by immunoaffinity columns. The different vitamers were analyzed in a UHPLC coupled to a triple quadrupole mass spectrometer with electrospray ionization.

Conclusions: Mackerel represents an important source of natural cobalamins, with recognized bioavailabilities and physiological effects. Individuals or ethnic groups whose diets exclude or restrict animal-based diets (such as vegans) may be at risk for inadequate nutrient intake. Furthermore, the risk benefits after long-term supplementation or intake of CNCbl fortified foods, due to cyanide accumulation could be a matter to evaluate on the vulnerable populations.