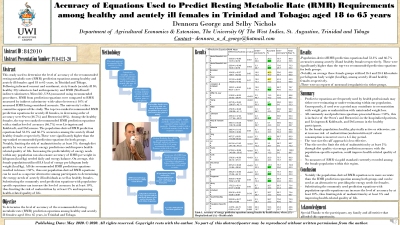 Has Audio
Objectives: To determine the level of accuracy of the recommended resting metabolic rate (RMR) prediction equations among healthy and acutely ill females: aged 18 to 65 years, in Trinidad and Tobago.

Conclusions: All the recommended RMR prediction equations resulted in biases >50%, thus our population-derived RMR equations can be used as a superior alternative among participants to determining the energy-needs of acutely ill individuals as well as healthy females. Substituting the commonly used prediction equations with population-specific equations can increase the level of accuracy by at least 10%, thus limiting the risk of malnutrition by at least 5% and improving health-related quality of life.