(P07-056-20) “The Best Portion of Your Life Is Small:” The Impact of Bariatric Surgery on Food Choices and Eating Motivations 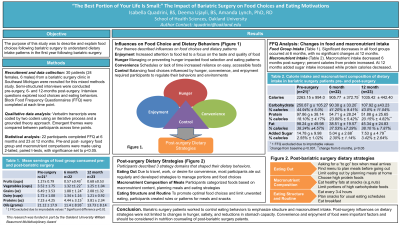 Objectives: The purpose of this study was to describe food choice changes and explain food choice rationales to understand dietary intake patterns in the first year following bariatric surgery.

Results: Three themes emerged to describe food choice patterns: macronutrient content at meals and snacks, eating structure and routine, and “eating out” habits. Both pre- and post-surgery, protein foods (e.g. dairy and lean meats) and vegetables were the most commonly reported “healthy” foods and were valued for satiety. Unhealthy foods included desserts, sweets, salty snacks, and fruit. Participants unanimously described reduced portion size, but not all chose foods based on perceptions of health. Other important food choice motivators included hunger, convenience, control and enjoyment. FFQ data revealed that participants reduced intake of all food groups at 6 months with increases in servings of fat (p< 0.05) 12 months. At 6 months, there was an increase in percent calories from protein (p< 0.000) and a decrease in percent calories from sweets (p< 0.021). At 12-months, there was a reversal of this trend: Protein decreased to 20% of calories (p< 0.007) and sweets increased to 18% (p< 0.045).

Conclusions: Participants’ perceptions of healthy and unhealthy food did not drive a majority of food choice decisions following bariatric surgery. Post-surgery changes in food choice patterns and dietary behaviors may not be long-term, which could impact weight loss outcomes.