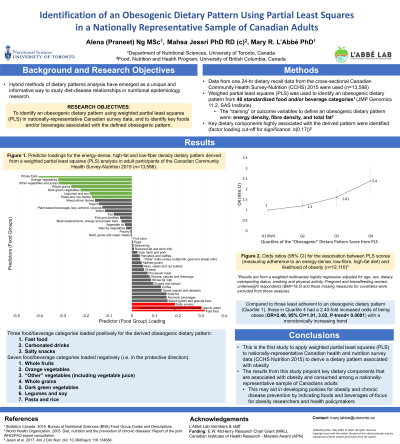 Objectives: Hybrid methods of dietary patterns analysis have emerged as a unique and informative way to study diet-disease relationships in nutritional epidemiology research. The objectives of this research were to identify an obesogenic dietary pattern using weighted PLS in nationally-representative Canadian survey data, and to identify key foods and/or beverages associated with the defined obesogenic pattern.

Conclusions: This study pinpoints key dietary components that are associated with obesity and consumed among a nationally-representative sample of Canadians adults. Compared to a similarly-defined obesogenic diet identified by our research group in 2004, the top contributors to a Canadian-specific obesogenic diet in 2015 have remained consistent. This evidence may aid in developing targeted policies and dietary interventions for obesity and chronic disease prevention.

Funding Sources: Supported by grants from the Burroughs Wellcome Fund Innovation in Regulatory Science Award and the Canadian Institutes of Health Research