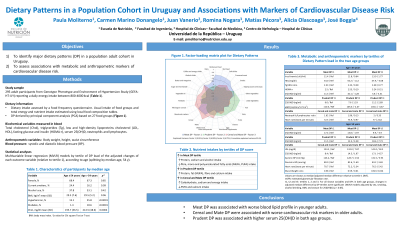 Objectives: The impact of habitual diet on chronic diseases has not been extensively characterized in South America. We aimed to identify major dietary patterns (DP) in a population adult cohort in Uruguay (Genotype Phenotype and Environment of Hypertension Study - GEFA-HT-UY) and to assess associations with metabolic and anthropometric markers of cardiovascular disease risk.