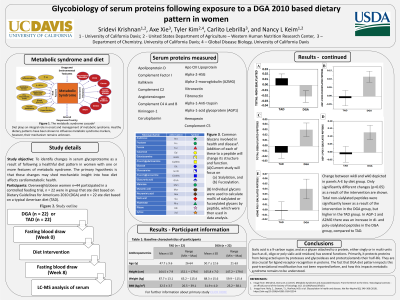 Objectives: Post translational glycosylation (PTG) creates glycoproteins. Glycosylation adds glycan sugars such as sialic acid and fucose to peptides. The type, number and location of these glycans affect the peptides' function and efficacy. Sialic acid is becoming a target biomarker of interest in cardiovascular disease, while fucose has been shown to be elevated in inflammation. The objective of this study was to determine if these glycans (on specific glycoproteins) were different following an 8-wk exposure in women at-risk for cardiometabolic disease to two different dietary patterns – one based on the DGA 2010 (DGA), another based on typical American diet (TAD).

Methods: Forty-four women were screened and enrolled in to an 8-wk controlled feeding trial, 22 each in DGA and TAD groups. Women were enrolled based on either having elevated fasting glucose, triglycerides, LDL-c, or total cholesterol, 2h glucose following a glucose challenge, or low HDL-c. Fasting serum samples at baseline (Wk0), following 2-wks of exposure (Wk2) and following 8 weeks of exposure (Wk8) were digested (tryptic) and characterized using a UHPLC MS protocol to evaluate 17 different circulating proteins that were associated with cardiometabolic disease. Primary characterizations involved evaluating overall protein concentrations, as well as glycovariant estimations. Change between Wk8 and Wk0 were calculated to evaluate the effect of the diet, and used in non-parametric van der Waerdan’s tests comparing DGA vs TAD.