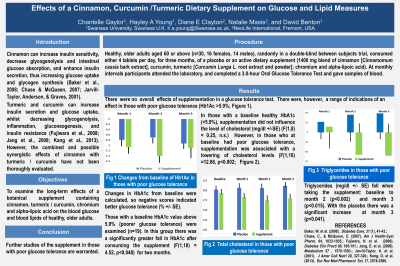 Results: After the two- and three-month time point there was a trend for a greater fall in BG in those taking the supplement.  However, at completion of the study there were no statistically significant overall effects of supplementation on either BG levels or hemoglobin A1c.  There was a positive effect of the supplement on total cholesterol and for individuals who had poorer glucose control (F(1,16)=12.86, P< 0.002). Results from the cognitive assessments indicated significant differences in word recall for the participants consuming the active dietary supplement (F(1,26)=5.74, P< 0.02). Measures of focused attention revealed significant improvements in reaction times in the group receiving the supplement (F(1,26)=4.48, P< 0.04).

Conclusions: These findings suggest that the chronic ingestion of a dietary supplement containing cinnamon and curcumin/turmeric extracts, chromium and alpha-lipoic acid positively impacts blood lipids as well as aspects of cognitive performance in healthy individuals assessed during an OGTT.