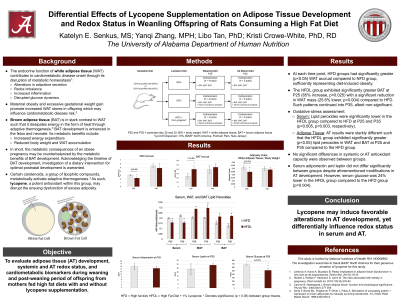 Has Audio
Objectives: Dietary patterns high in fat contribute to the onset of cardiometabolic disease through accrual of adipose tissue (AT). Nevertheless, carotenoids, such as lycopene, may disrupt these metabolic perturbations. The purpose of this study was to evaluate AT development, systemic and AT redox status, and cardiometabolic biomarkers during weaning and post-weaning periods of offspring from mothers fed high fat diets with and without lycopene supplementation.

Methods: Sprague-Dawley rats arrived on the 2nd day of gestation and were randomized to 25% normal fat diet (NFD) or 50% high fat diet (HFD). Upon delivery, half of HFD mothers were transitioned to HFD supplemented with 1% lycopene (HFDL group). Remaining mothers continued NFD or HFD without supplementation. Four pups/litter were euthanized at postnatal day 25 (P25). Beginning at P25, weanling pups were fed diets of their respective mothers until euthanization at P35 (three pups/litter). Visceral white AT (WAT) and brown AT (BAT) mass was determined, as well as lipid peroxides and antioxidant capacity (AC) of these tissues and serum. Cardiometabolic biomarkers were assessed at P25.

Conclusions: Results from this exploratory analysis suggest that lycopene may induce favorable alterations in AT development, yet it differentially influences redox status in serum and AT. Additional research is warranted to elucidate molecular mechanisms by which lycopene influences AT biology and redox status.