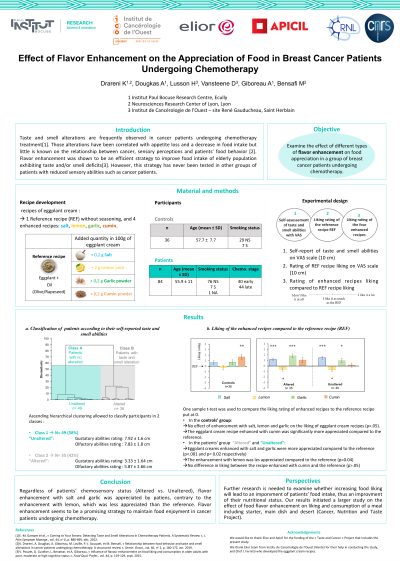 Objectives: Given the influence of sensory signals on food intake regulation and the subsequent nutritional status, it is important to reduce the impact of commonly observed smell and taste alterations on the pleasure of eating during chemotherapy. This study aimed to examine the effect of various types of flavor enhancement on the appreciation of an appetizer by a group of patients undergoing chemotherapy.

Methods: Five eggplant appetizers with no seasoning (REF) or enhanced with either salt, lemon, garlic or cumin were developed. In this cross-sectional study, 36 healthy female subjects (age 58 ± 7 y) (control group) and 84 breast cancer patients (age 56 ± 11 y) treated with chemotherapy were recruited. A hierarchical cluster analysis based on patients' self-reported smell and taste abilities classified the patients in two groups: the 'unaltered, (high sensory abilities) n=49' and the 'altered, (poor sensory abilities), n=35' group. Participants tasted and assessed the appreciation of the reference appetizer on a visual analog scale and performed a randomized comparative liking task, by rating the appreciation for each flavor-enhanced appetizer relative to the REF (one-sample t-test).

Conclusions: The salt and garlic enhancements were appreciated by the patients independent of the stage of chemotherapy or the severity of smell and taste alterations. Flavor enhancement seems a good strategy to maintain the pleasure of eating in patients undergoing chemotherapy. Further research is still needed on the appreciation and intake of a complete meal (starter, main course, dessert).