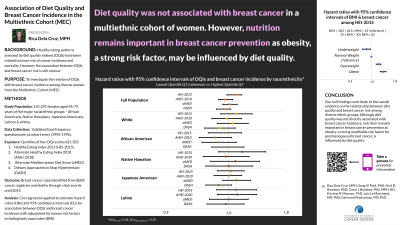 Objectives: Healthy eating patterns assessed by diet quality indexes (DQIs) have been related to lower risk of cancer incidence and mortality; however, the association between DQIs and breast cancer risk is still unclear. This study investigated the relation of DQIs with breast cancer incidence among diverse women from the Multiethnic Cohort (MEC).

Conclusions: Although adherence to DQIs was not associated with breast cancer risk overall or within racial/ethnic groups, nutrition remains important in breast cancer prevention as obesity, a strong modifiable risk factor, may be influenced by diet quality.

Funding Sources: This work was supported by grants from the National Cancer Institute.