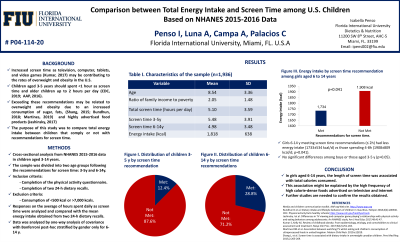 Objectives: Childhood obesity is a multifactorial condition related to energy intake and decreased energy expenditure. Increased screen time as television, computers, tablets, and video games may be contributing to the rates of overweight and obesity in the United States. The American Academy of Pediatrics and the Centers of Disease Control and Prevention recommend that children aged 3-5 years should spend up to 1 hour as screen time and older children up to 2 hours per day. Exceeding screen time recommendations may be related to overweight and obesity due to an increased consumption of sugar, fats, and highly advertised food products and to a lower energy expenditure. Our objectives were to compare total energy intake between children that comply or not with recommendations for screen time.

Methods: This was an analysis of data from NHANES 2015-2016. Responses on the average of hours spent daily as screen time from television (TV), video watching, and computer use were analyzed and compared with the mean energy intake obtained from two 24-h dietary recalls. The sample was divided into two age groups following the recommendations for screen time: 3-5 y and 6-14 y. Data were analyzed by one-way analysis of variance (ANOVA), with Bonferroni post-hoc stratified by gender only for 6-14 y.

Conclusions: Most of the children did not meet the recommendations for screen time. In girls aged 6-14 years, the length of screen time was associated with total calories consumed. This association might be explained by the high frequency of high calorie-dense foods advertised on television and the internet, which may influence food choices or by less energy expenditure with the long hours of sedentary viewing. This needs to be confirmed in future studies.