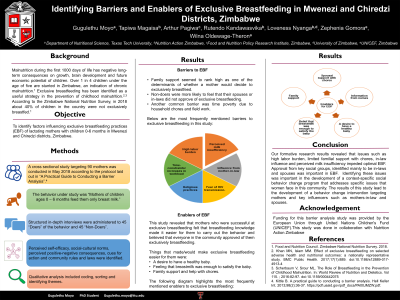 Objectives: To build an understanding of factors that influence exclusive breastfeeding practices (EBF) of lactating mothers which will contribute to the development a behavior change intervention targeting mothers in households with children 0-6 months in Mwenezi and Chiredzi districts of Zimbabwe.

Methods: A cross sectional study was conducted in May 2018 according to the protocol laid out in United States Agency for International Development (USAID)’s “A Practical Guide to Conducting a Barrier Analysis.” It was carried out in four administrative wards in Mwenezi district and six in Chiredzi district. The behavior under study was “Mothers of children ages 0 – 6 months feed them only breast milk.” Structured in-depth interviews were administered to a total of 90 mothers with children aged 0-6 months, targeting 45 doers and 45 non-doers for the behavior, as part of formative research for the development of a social behavior change intervention. Perceived self-efficacy, social-cultural norms, perceived positive-negative consequences, cues for action and community rules and laws were identified. Qualitative analysis included coding, sorting and identifying themes.

Results: Barriers to EBF included high labor burden, perceived milk insufficiency and influence from mother-in-law. The main enablers were spousal support with chores and information from nurses. Mothers said that other factors that made EBF easier were a desire to have a healthy baby, feeling that breastmilk was enough to satisfy the baby and family support, while breast pain, and needing to give the baby water and other concoctions due to the heat or religious practices made it difficult. Some mothers felt that the negative consequences of breastfeeding were that it is time-consuming, increases workload and increases the risk of HIV transmission.

Conclusions: High labor burden, limited support with chores, in-law influence and perceived milk insufficiency impeded optimal EBF. Approval from in-laws and spouses was important in EBF.  These findings were used to develop a social behavior change program that is currently being implemented in Zimbabwe, targeting pregnant and lactating women and key influencers such as mothers-in-law and spouses.

Funding Sources: The funding for the barrier analysis study was provided by the European Union through United Nations Children's Fund (UNICEF).