(P04-096-20) Dietary Behaviors, Diet Quality, and Obesity among Children from Low-Income Households by Gender of Caregiver and Child: Results from the 2018 California Family Health Study 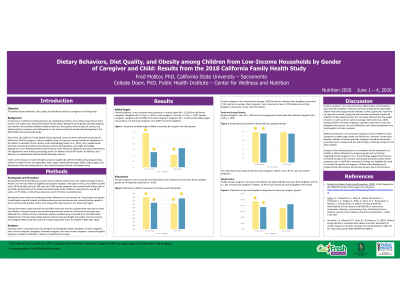 Methods: Permission to interview 2,242 children (5-12 y) from randomly-sampled low-income (≤185% of the federal poverty level) households across California was obtained from male or female caregivers screened as the person who “assumes the responsibility in caring for the health and well-being of the child(ren).” A caregiver was further defined as “the male (or female) who prepares the meals or buys food for the child(ren).” Bilingual interviewers administered a 24-hour dietary recall assessment (ASA-24) while referencing a pictorial food and beverage portion-size booklet and measuring cups and spoons. Prior to the interviews, households also received a tape measure with instructions for recording children’s height. Height and weight were recorded during the interviews. BMI-for-age weight categories and the corresponding percentiles were calculated. Children at or above the 95th percentile were classified as obese. Outcomes were compared across four caregiver by child gender dyads: daughters of male caregivers; sons of male caregivers; daughters of female caregivers; and sons of male caregivers. Analyses controlled for children’s race/ethnicity and age.

Conclusions: Unique to the existing literature is our between-family comparisons of children’s dietary behaviors by caregiver gender and our findings that female caregivers’ sons are more likely to be obese and report related unhealthful dietary behaviors compared with female caregivers’ daughters. These findings suggest that the focus on female caregivers for nutrition and obesity prevention public health programs such as SNAP-Ed is warranted, but highlight the need to consider the gender of their children when designing and implementing interventions and services aimed a low-income families.