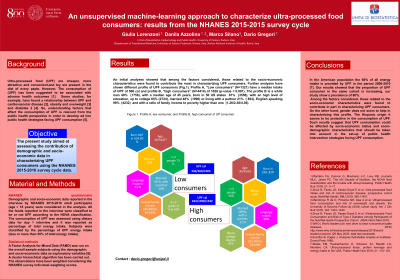 Objectives: The consumption of ultra-processed food (UPF) has been suggested to be associated with adverse health outcomes.  Understanding factors that affect the consumption of UPF is relevant from the public health perspective in order to develop ad hoc public health strategies facing UPF consumption. The present study aimed at assessing the contribution of demographic and socio-economic data in characterizing UPF consumers using the NHANES 2015-2016 survey cycle data.

Results: Analyses were performed on 5266 survey participants that were found to be UPF consumers; of these, 2669 had an UPF intake above the 50% of the total energy intake. The results of the FAMD showed that the first three latent dimensions identified explained the 67.5% of overall data space. The main contributors of the first latent dimension were the family income (32.14%), the ratio of family income to poverty (31.67%), and the annual household income (27.36%). The factors that contributed the most to identify the second latent dimension were the number of people in the household (37.57%), the number of children aged 6-17 years old and of preschoolers living in the household (24.84% and 17.52%, respectively).