(P04-039-20) Food Insecurity Is Not Related to Cognitive Function in School-Aged Children in Querétaro, Mexico 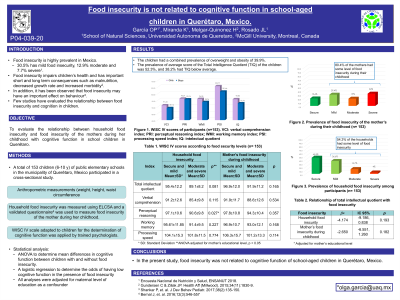 Methods: A total of 153 children (6-10 y) of public elementary schools in the municipality of Querétaro participated in a cross-sectional study. Household food insecurity was measured using the ELCSA (Latin American and Caribbean Food Security Scale) and a validated questionnaire to measure food insecurity of the mother during her childhood. Anthropometric measurements (weight, height, waist circumference) were taken by standardized personnel and the WISC IV scale adapted to children for the determination of cognitive function was applied by trained psychologists. Statistical ANOVA tests were used to determine mean differences in cognitive function between children with and without food insecurity. A logistic regression was also calculated to determine the odds of having low cognitive function in the presence of food insecurity, both at the household level and of the mother during her childhood. All analyses were adjusted for maternal level of education as a confounder.

Conclusions: In the present study, food insecurity was not related to cognitive function of school-aged children in Querétaro, Mexico.