(P04-029-20) Has the Reduction of Salt in the Bread's Composition Played a Role in Reducing Blood Pressure in Morocco? 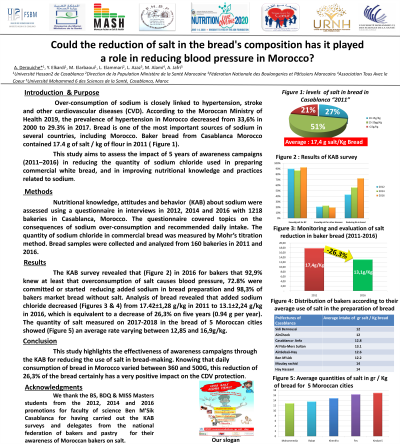 Objectives: Overconsumption of sodium can cause several noncommunicable diseases such as hypertension which alone is responsible for 10% of cardiovascular disease. According to the Moroccan Ministry of Health 2018, the prevalence of hypertension in Morocco rose from 33.6% in 2000 to 29.3% in 2018. Bread is the main vehicle of salt for daily food intake in Morocco
the objective of this research is the evaluation of the impact of 5 years of awareness campaigns (2011-2016) on the incentive of bakers to reduce the amount of salt used in the preparation of commercial white bread and on improvement of their knowledge and nutritional practices related to salt

Methods: Knowledge, attitudes and nutritional practices (KAB) on sodium were assessed using a questionnaire during interviews in 2012, 2014 and 2016 with 1,218 bakeries in Casablanca, Morocco. The questionnaire covered subjects on diseases linked to overconsumption of salt, the recommended daily intake and their adhesions to gradually reducing salt in the preparation of bread. The amount of sodium chloride in commercial bread was measured by the Mohr titration method. Bread samples were collected and analyzed in 160 bakeries in 2011 and 2016.

Conclusions: This study highlights the effectiveness of awareness campaigns through the CAP to reduce the use of salt in breadmaking. Knowing that the daily consumption of bread in Morocco varied between 360 and 500g. This 26.3% reduction in salt in bread certainly has a positive impact on CVD protection and would be attributed to the reduction in the prevalence of blood pressure obtained in 2018 among Moroccans.