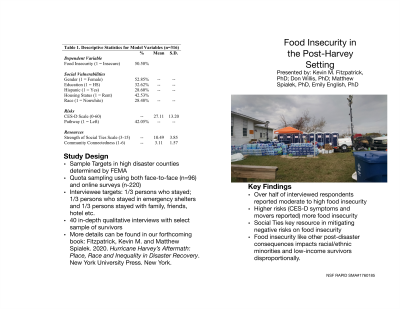 Methods: Random and representative samples were collected among survivors living on the Texas Gulf Coast. Efforts were made to sample and interview survivors in both different cities as well as those experiencing different evacuation circumstances. Both face-to-face interviews and online interviews were used to collect data from 316 survivors. The sample was obtained using quota groupings based on sociodemographic composition and residential location.

Results: Both correlation and regression results show support for the general risk and resource hypotheses. Sociodemographic findings show that younger, renters, poorer educated survivors without access to their own transportation reported higher levels of food insecurity in the weeks and months following Hurricane Harvey making landfall in August 2017. Additionally, risks for higher levels of food insecurity were found among persons with higher depressive symptomatology, with higher levels of previous disaster exposure, and reporting a greater concern for climate change. Both strength of social ties and mastery of fate were negatively related to food insecurity, supporting the general resource hypothesis that a greater presence of either social or psychological resources could potentially lower food insecurity among post-disaster survivors.

Conclusions: Our findings lend support to a risk and resources model that has already been applied to food insecurity research in other populations. Its applicability to the resource limited post-disaster setting is important and provides evidence for addressing directly the immediate mental and physical health needs of the population, in addition to the service provider and infrastructural need. Like earlier work, our findings suggest an uneven recovery experience that is likely both dependent on who you are and where you live.