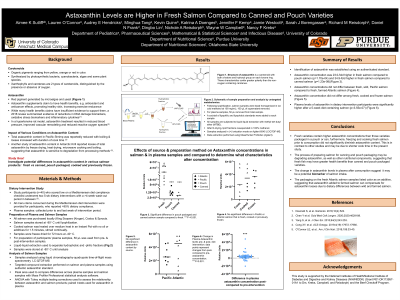 Objectives: Astaxanthin, a predominately marine-source carotenoid, is the subject of a large number of studies for its antioxidant and anti-inflammatory properties. Astaxanthin is not generally a primary carotenoid in human plasma due to relatively low dietary intake. Salmon is the one of the few dietary sources of astaxanthin in typical American diets and the concentration may vary by the source of salmon foods. A study was performed to 1) Compare astaxanthin concentration in various sources of salmon; 2) Compare astaxanthin plasma concentrations before and after salmon consumption.

Methods: An assortment of salmon types and forms was purchased in the greater Denver, CO region: wild Pacific, farmed Atlantic, canned and pouch. Plasma samples were collected from five participants prior to and after a five week Mediterranean diet intervention study, which included two servings of salmon per week. Salmon samples were freeze-dried, then both salmon (in triplicate) and plasma samples were prepared by liquid-liquid extraction for untargeted liquid chromatography-mass spectrometry analysis. An accurate mass and retention time database was used to identify and quantify astaxanthin. ANOVA with Tukey multiple testing corrections was used to assess the relationship between astaxanthin and the different salmon products, and paired t-tests for astaxanthin in plasma.