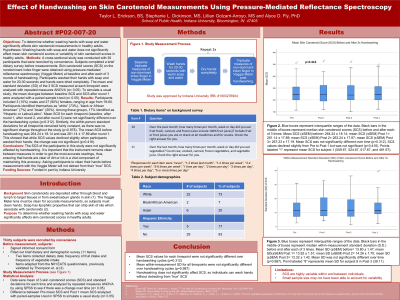 Methods: A cross-sectional study was conducted with 30 participants that were recruited by convenience. Subjects completed a brief dietary survey before measurements. Skin carotenoid scores (SCS) on the nondominant index finger were obtained using pressure-mediated reflectance spectroscopy (Veggie Meter) at baseline and after each of 3 rounds of handwashing. Participants washed their hands with soap and water for 20-30 seconds and hands were dried completely. The mean and standard deviation (SD) of the 3 SCS measured at each timepoint were analyzed with repeated-measures ANOVA (α= 0.05). To simulate a usual study, the mean changes between baseline SCS and SCS after round 1 were analyzed with a paired sample t-test (α= 0.05).

Results: Participants included 3 (10%) males and 27 (90%) females, ranging in age from 19-60. Participants identified themselves as “white” (73%), “black or African American” (7%) and “Asian” (20%). Among these groups, 17% identified as “Hispanic or Latina/Latino”.  Mean SCS for each timepoint (baseline, after round 1, after round 2, and after round 3) were not significantly different over the handwashing cycles (p=0.312). Similarly, the within-person standard deviations for all timepoints remained fairly constant, as there was no significant change throughout the study (p=0.978). The mean SCS before handwashing was 264.24 ± 18.14 and was 261.14 ± 17.89 after round 1. This showed that while SCS values declined slightly when participants washed their hands, the change was not significant (p=0.416).

Conclusions: The SCS of the participants in this study were not significantly affected by handwashing. It is important that the instrument remains clean between measures in order to get the most accurate readings, thus, ensuring that hands are clear of dirt or ink is a vital component of maintaining this accuracy. Asking participants to clean their hands before measurement with the Veggie Meter will not detract from their “true” SCS.