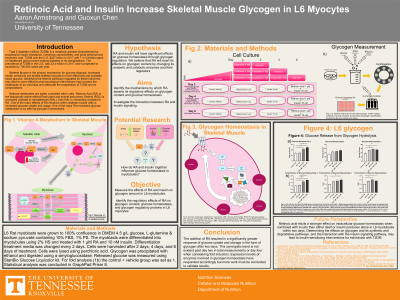 Objectives: The skeletal muscle is critical for the control of glucose homeostasis partially through glycogenesis. The effects of retinoic acid (RA) on glycogen content and expressions of key glycogenic proteins without or with insulin in L6 rat myocytes deserve to be studied.

Methods: L6 myocytes at confluence were induced to differentiation using DMEM with 2% horse serum. Cells were incubated in medium with vehicle control or 1 µM RA without or with 10 nM insulin for 2, 4, and 6 days. Glycogen was extracted and analyzed using α-amyloglucosidase and released glucose assay. Proteins in cell lysates from parallel groups were extracted and subjected to analysis using western blotting. The expression levels of glycogen synthase (GS), phospho-glycogen synthase (Ser 641) (p-GS), glycogen synthase kinase 3-β(GSK3β), and phospho-glycogen synthase kinase 3-β (p-GSK3β) were determined using their specific antibodies, and then quantified with ImageJ software.

Conclusions: Treatments with RA and insulin increase the glycogen content in L6 cells via upregulation of glycogenesis. A synergy of RA and insulin can be seen. The increases of total GS and decreases of p-GS/GS ratio contribute to the elevation of GS activity. RA likely exerts its glycogenic effects through changes of the total GS level and phosphorylation by GSK3β.

Funding Sources: Internal fund at the University of Tennessee