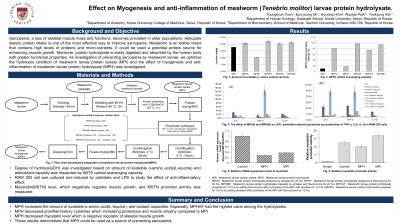 Objectives: Sarcopenia, a loss of skeletal muscle mass and functions, becomes prevalent in older populations. Adequate dietary protein intake is one of the most effective ways to improve sarcopenia. The mealworm is an edible insect that comprises high levels of proteins and micro-nutrients. It could be used a potential protein source for enhancing muscle growth. Also, protein hydrolysate is easily digested and absorbed by the human body with greater functional properties. In investigating the prevention of sarcopenia with mealworm larvae, we optimize the hydrolysis condition of mealworm larvae protein isolate (MPI) and the effect of myogenesis and anti-inflammation of mealworm larvae protein hydrolysate (MPH).

Methods: The optimization of MPH by alcalase and flavorzyme was investigated based on the amount of available α-amino acids (L-Leucine) by TNBS assay and the distribution patterns of molecular weight by SDS-PAGE. ABTS radical scavenging capacity, expression of myostatin (MSTN), MSTN promoter activity, and anti-inflammatory induced by palmitate and LPS were examined.

Results: The hydrolysate prepared for 12 hours by adding flavourzyme after hydrolysis of the MPI with alcalase for 12 hrs under 1% substrate and 1% enzyme/ substrate at 55˚C, pH 8 showed the highest available α-amino acid (22.09 mg/g) and had the largest amount of low-molecular peptides at 10kDa or less. Antioxidant capacity was also the highest (97.8%) among the hydrolysates prepared under different conditions. In the MSTN level which negatively regulate muscle growth, MPH (0.28 MSTN/GAPDH) was lower than MPI (0.38 MSTN/GAPDH). Also, in the MSTN promoter activity, MPI (16.94 Luc / β-gal) was higher than the control while MPH (9.99 Luc / β-gal) was lower activity than the control (12.47 Luc / β-gal). MPI and MPH induced lower expression levels of IL-6, TNF-a, and IL-1b cytokines.

Conclusions: MPH had better capacity in myogenesis compared to MPI, particularly hydrolyzed by flavourzyme after hydrolysis of the MPI with alcalase. Also, the MPH decreased proinflammatory cytokines which increase proteolysis and muscle atrophy. These results demonstrate that MPH could be used as a source for preventing sarcopenia.

Funding Sources: This study was supported in part by the National Research Foundation of Korea.