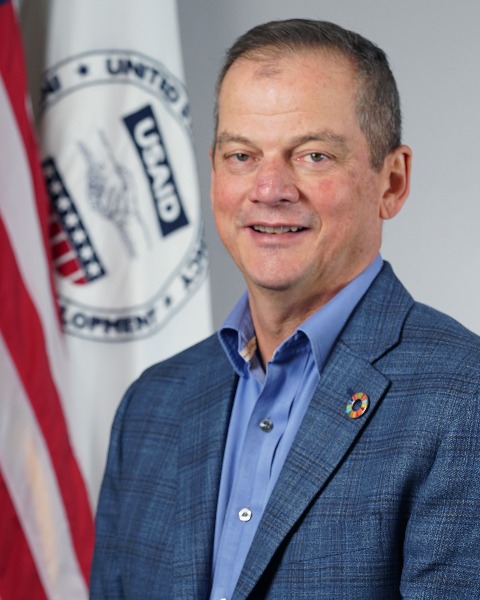 Shawn K. Baker is the Chief Nutritionist for the U.S. Agency for International Development (USAID). He chairs the Agency’s Nutrition Leadership Council, oversees the vision and strategy of the Agency’s Center for Nutrition in the Bureau for Resilience and Food Security, and coordinates related efforts across USAID. He also guides USAID’s investments and engagement with partners to address malnutrition in developing countries.

Prior to joining USAID, Baker was the first director of nutrition at the Bill and Melinda Gates Foundation. He has over 30 years’ experience in global public health nutrition, including 25 years living in sub-Saharan Africa and South Asia.

Baker worked for Helen Keller International for 19 years, including 16 years as Vice President and Regional Director for Africa. He also served as country director for Helen Keller International in Niger and Bangladesh. He spent nine years with Tulane University School of Public Health and Tropical Medicine working with the Niger Health Information System, Center for International Health and Development, Famine Early Warning System in Southern Africa and Niger, and Madagascar food and nutrition surveillance system. Baker started his career in international development as a Peace Corps Volunteer in the Democratic Republic of the Congo.

His service on committees and advisory groups includes the Technical Review Panel for The Global Fund to Fight AIDS, Malaria and Tuberculosis, which he chaired until November 2014. He was chair of the Executive Committee of the Scaling Up Nutrition Movement and now serves as special advisor. He was also on the board of the Global Alliance for Improved Nutrition from 2013-2016, and now serves on its Partnership Council.

Baker has a master’s of public health from Tulane University, with concentrations in international health and nutritional epidemiology. He earned his bachelor’s of science degree in biology from the University of Miami